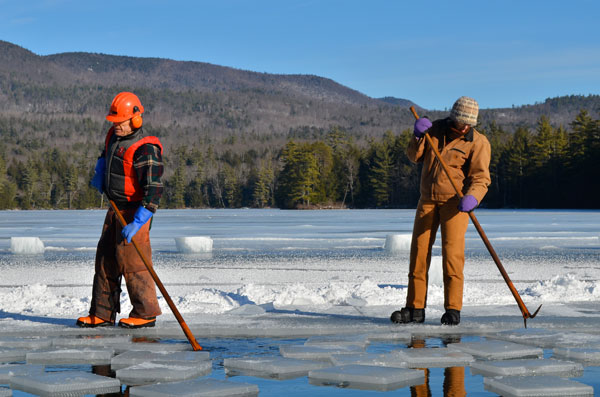 SANDWICH- The ice harvest is a tradition that has been going on for more than a century at Rockywold-Deephaven Camps, and due to a strange start to winter with unseasonably warm temperatures, the start has been delayed slightly.

Camp manager John Jurczynski has been monitoring the ice on a daily basis and believes they should be able to start the harvest sometime around Jan. 19.

“The earliest I’d say we’ll be doing it is a week from Tuesday, a day after Martin Luther King Day,” Jurczynski said. Realistically, it will be the following Monday, but it really all depends on the weather.

He said surprisingly, this isn’t too much later than normal, as last year the harvest started about a week earlier than this year’s projection. The starting date tends to vary, with two occasions happening as early as the week between Christmas and New Year’s and others, like in 2014, being as late as Feb. 7.

Normally mid-January is the time we do it, said Jurczynski. It will be close to that, and maybe a little bit later.

There are two locations where the harvest has occurred. Jurczynski said on Saturday that Squaw Cove has more than seven inches of ice, while the historic location of Deep End has next to nothing. Twelve inches of ice is required for the harvest to happen, and he said unless something drastically changes, they will be harvesting in Squaw Cove. He said there is a 99 percent chance they will be at Squaw Cove.

Odds are, we will be harvesting from Squaw Cove, said Jurczynski.

Jurczynski said about 15 years ago, there was a similar winter with mild temperatures. Ice wasn’t forming in Deep End, so they sought out Squaw Cove to continue the harvest. He said with only a few inches of ice that year, they became nervous and started searching for a spot that was more protected. They found Squaw Cove and now it has become one of their harvesting spots.

Jurczynski said with the rain on Sunday, it should actually work out fine for the ice because the temperatures are expected to drop as the week goes on. He said issues arise when there is too much wind or snow, as the snow will insulate things and decrease the speed of the growth of ice. Fortunately, there is not much for snow in the forecast.

The ice harvest is an annual tradition on Squam Lake, and one of the last remaining ones in the entire country. While the camp has been open since 1897, organizers have to make educated guesses on how long the tradition has been going. Back in the day, there were no trucks and chainsaws. Instead, there were horses pulling the ice from the lake.

Each year, a crew of about a dozen people cut through the ice with a massive straight saw and several chainsaws. Many have been involved for many years, including Norman Lyford, who has been helping cut the ice for more than seven decades. He learned from his father, Colby, when he was only a teenager.

Each ice cake is about 12 inches-by 15 inches-by 19 inches. The ice is moved along in an assembly line fashion, being pushed with long sticks, and taken up on a ramp into a pickup truck. The truck then takes the blocks of ice to a couple of ice houses named Rockywold and Deephaven that are lined with saw dust for insulation.

Each block weighs about 120 pounds and each year there is more than 200 tons of ice harvested. There are about 1,200 blocks harvested per day. The process tends to last about three days.

Each cabin at Rockywold-Deephaven Camps is equipped with an old-fashioned ice box instead of modern refrigeration units. There was actually a time when the camp toyed with the idea of having mini-fridges in the camps, but this was frowned upon by guests.

During the summer, ice is distributed to the cabins to be put into the ice boxes for keeping food and beverage items cold. Guests generally stay at Rockywold-Deephaven Camps for a 14-week period over the summer.