Every winter, long after the last guests have departed, a ritual takes place at RDC-- the harvesting of lake ice. When the ice off the Deephaven shore becomes eleven or twelve inches thick (usually mid January to mid February) the work begins. In one week, 200 tons of ice are taken from the lake by a crew that includes many who have done the job for decades and a few who follow in their father's and grandfather's footsteps. The ice will fill the cottage ice boxes in the summer, keeping alive a connection between the camps and the natural environment that surrounds them.

The ice is well insulated by sawdust (enabling it to stay frozen until after the last RDC guest leaves in September) and is delivered to antique iceboxes in each cottage. RDC stores approximately 2,000 ice blocks in the Rockywold Ice House and about 1,600 blocks in the Deephaven Ice House.

The ice blocks are 16" x 19" x ice depth, which is usually between 12" and 15". The blocks weigh between 120 and 150 pounds each and are stored in two icehouses, one in Rockywold and one in Deephaven.

At regular intervals the question is raised if getting ice from the lake is the most efficient form of refrigeration for the camps. The possibility of electric refrigerators is considered--and then rejected as the appeal of lake ice holds sway. In 1967, the camps bought four compact refrigerators as an experiment. No guests wanted them, so they ended up in staff quarters.

In 1996, Chip Emmons, a great-great-grandson of Mary Alice Armstrong, took part in the icing operation for the first time. He was taught the process by foreman Norman Lyford who has operated the icing saw for over forty years.

I awoke at 5:30 a.m. No need for an alarm--my mind had been awaiting these days. The thermometer read -8 degrees on the warmest of those five mornings. I'd bundle up in my cold weather gear, shovel the snow from my car, and start off. I'd leave the confines of my teaching classroom and walk into a new classroom each morning. This classroom was Norman Lyford's. Now I was the student. I watched, listened to, absorbed, and felt what Norman was doing and saying. The idiosyncrasies of the harvest were unending and Norman knew them all. He knew what had to be done and he made sure that it was done the right way.

At the time Deephaven and Rockywold were started, refrigeration using lake and river ice was common. Now, RDC's is one of the last icing operations in New England.

Vermont Public Radio But Why Podcast: How did people keep food cold in olden times?

Browse through out gallery below (click on any image to view full size) and get a taste for exactly what goes on during one of our annual Squam Lake - RDC Ice Harvest. 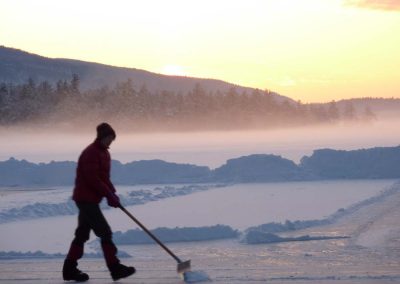 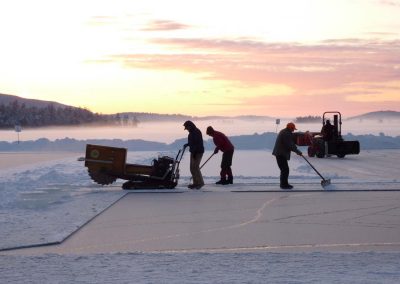 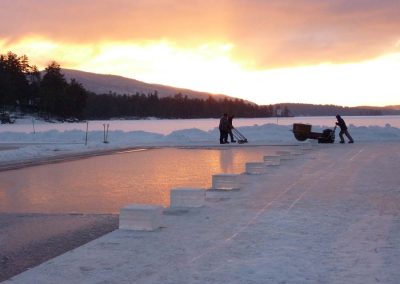 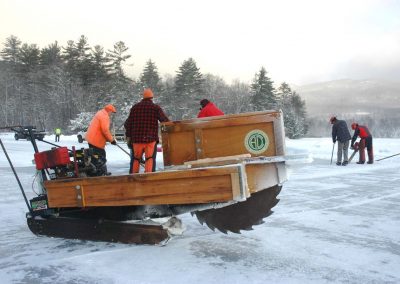 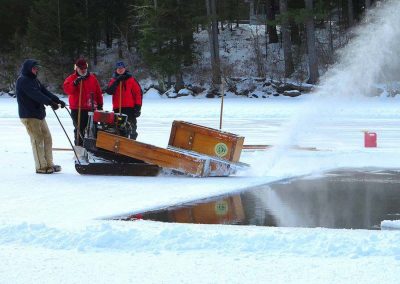 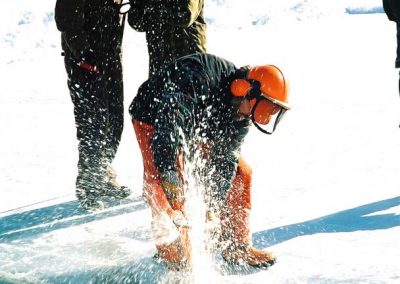 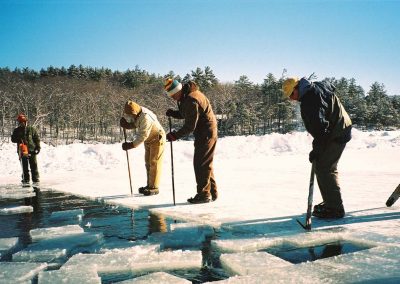 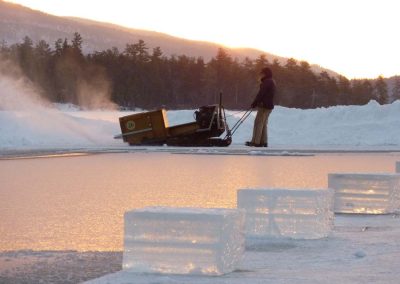 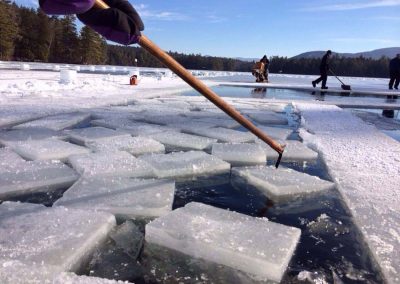 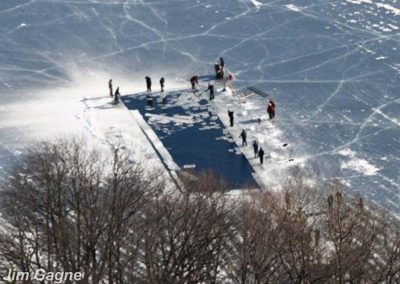 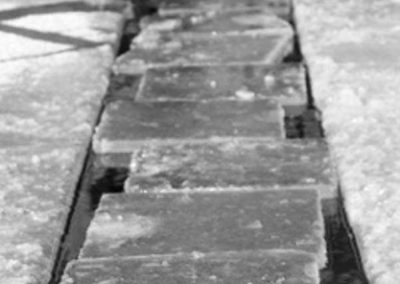 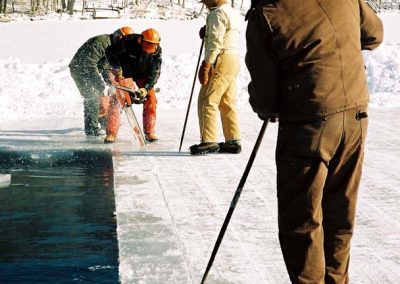 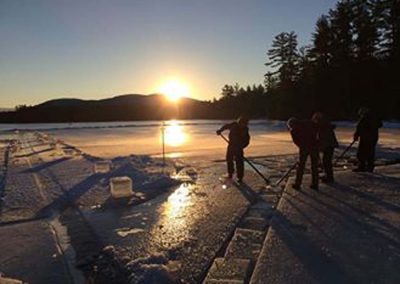 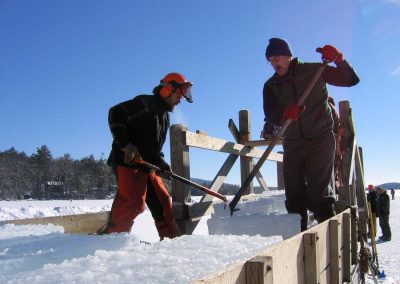 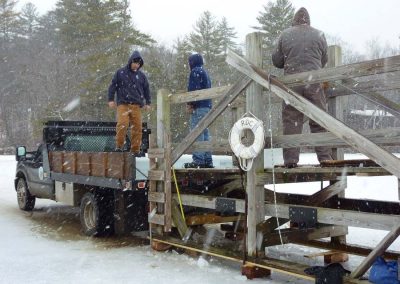 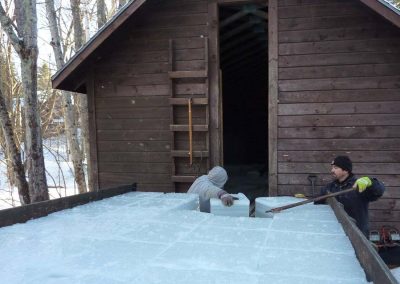 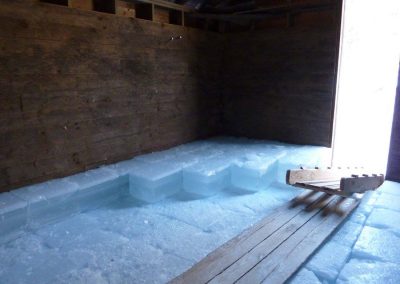 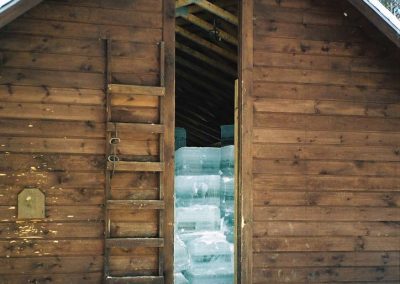 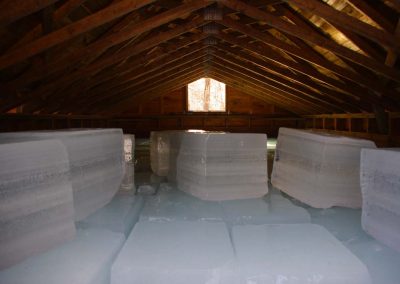 For more videos and other great news and pictures, visit our blog

The icing operation at RDC has occurred every year for the last one hundred years. It is important to the camps because it provides the ice which is distributed to the guests during the summer for refrigeration purposes, and because it keeps alive a connection between the camps and the natural environment which surrounds them. 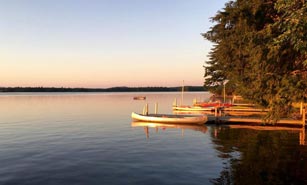 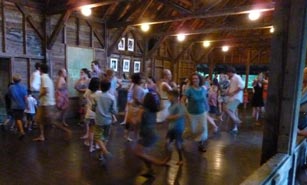 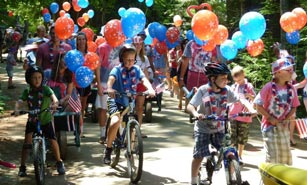 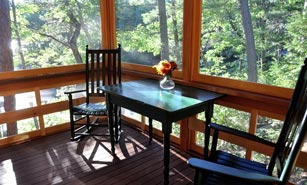 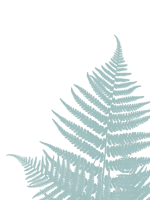 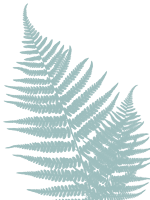 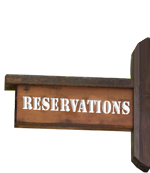